The European Accessibility Act (EAA) is legislation that was passed by the E.U. in April 2019 to require accessibility for digital products and services.

EN 301549 is a policy document produced by the European Telecommunications Standards Institute (ETSI), which is the E.U. agency that regulates the digital sphere. EN 301549 defines official standards for web accessibility.

It is important to note that European policy on web accessibility took shape over a long, often complicated process. For companies to fully understand European accessibility compliance, a bit of background is necessary. 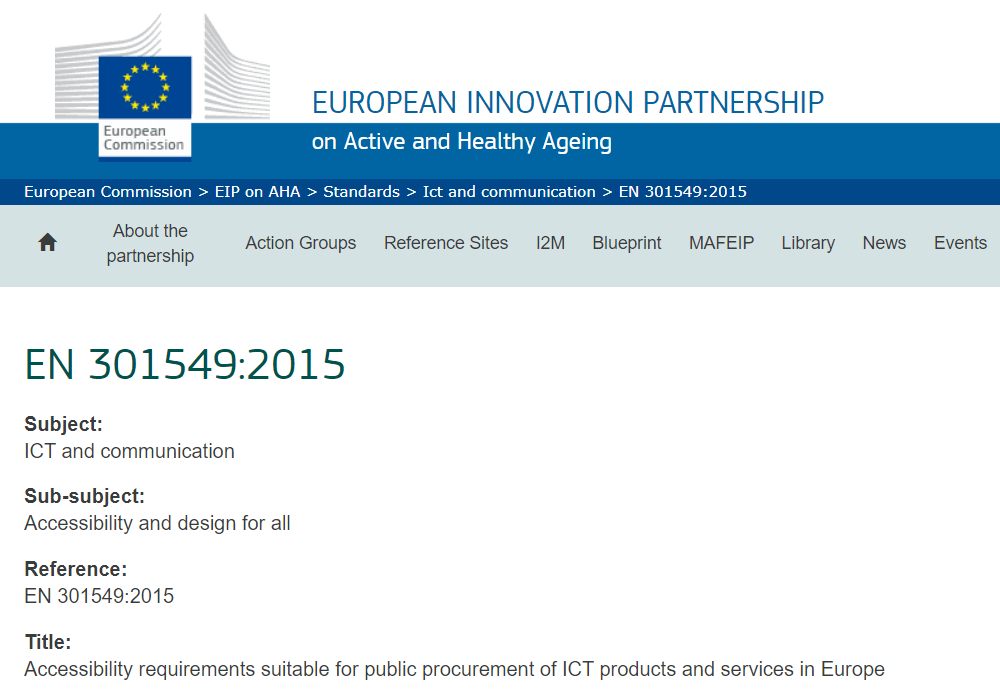 Establishing European policy on web accessibility was a long and complicated process. Beginning in the early 2000s, E.U. authorities made policy decisions that address the needs of citizens with disabilities.

Milestones along the road to full web accessibility laws include:

The latest version of EN 301549 was released in 2021, based on the Web Content Accessibility Guidelines, WCAG, of the World Wide Web Consortium (W3C). It was designed to reflect other national and international protocols such as the American Section 508. However, the standards weren’t enforced by law until the EAA was passed in 2019.

From the date the EAA came into force, E.U. service providers were given up to five years to implement the law’s requirements (June 28, 2025, is the deadline). As many have pointed out, companies will likely need it considering the burden EAA entails.

What are the requirements of the EAA?

The EAA doesn’t state-specific accessibility standards or requirements for compliance, because it wants to leave flexibility within the law. The EAA official Fact Sheet states that the law will “not impose detailed technical solutions telling how to make” a site compliant, although you’ll find general requirements and non-binding examples within the legislation. For example, the EAA requires that no website or digital service be limited to a single mode of interaction, so audio content must also be accessible through captions, and written text through a screen reader.

But in practice, there are many indications that companies have to meet the standards of EN 301549. For a start, it’s only natural for regulators to consult the EU’s official document defining web accessibility when assessing website compliance.

Second, EN 301549 was referenced repeatedly in the run-up to the codifying of the EAA, like in the law's proposal text.

Finally, the European Disability Forum (EDF), which is one of the main non-governmental advocates of the EAA, has made several formal recommendations that EN 301549 should be the foundation for E.U. accessibility law. Considering that the EDF was one of the key consultants on the formulation of the EAA, it is almost certain that regulators will follow the group’s guidance on this point too.

The EAA is deliberately designed so that it’s not a blanket law affecting all industries. The EAA clearly defines which products and services are subject to the new law. They include:

Although it’s originally aimed at public and governmental groups, it also affects private businesses. Companies that provide services for government agencies in Europe will need to be sure their accessibility standards measure up. The EAA also requires all online business services to be accessible to individuals with disabilities.

How can you know if a website is EAA compliant?

Ensuring that a website’s accessibility standards are up to par begins with an audit. An EAA Compliance Checker such as accessScan is available online and provides a detailed overview and report of accessibility barriers that limit people with disabilities from using a website. An audit is a surefire method of understanding compliance levels in accordance with the EAA and EN 301549.

Find out now if your website
is WCAG  & ADA  compliant