Everything on Section 508  Compliance

Section 508 of the Rehabilitation Act

Section 508 of the Rehabilitation Act requires that any technology that’s used by a federal agency or department has to be accessible to people with disabilities. It applies both to tech used by federal employees, and tech used by members of the public who are interacting with a government agency.

In the early 1970s, American lawmakers started to become more aware of the need for legislation that requires the accommodation of citizens with disabilities. The first piece of law was the Rehabilitation Act of 1973. 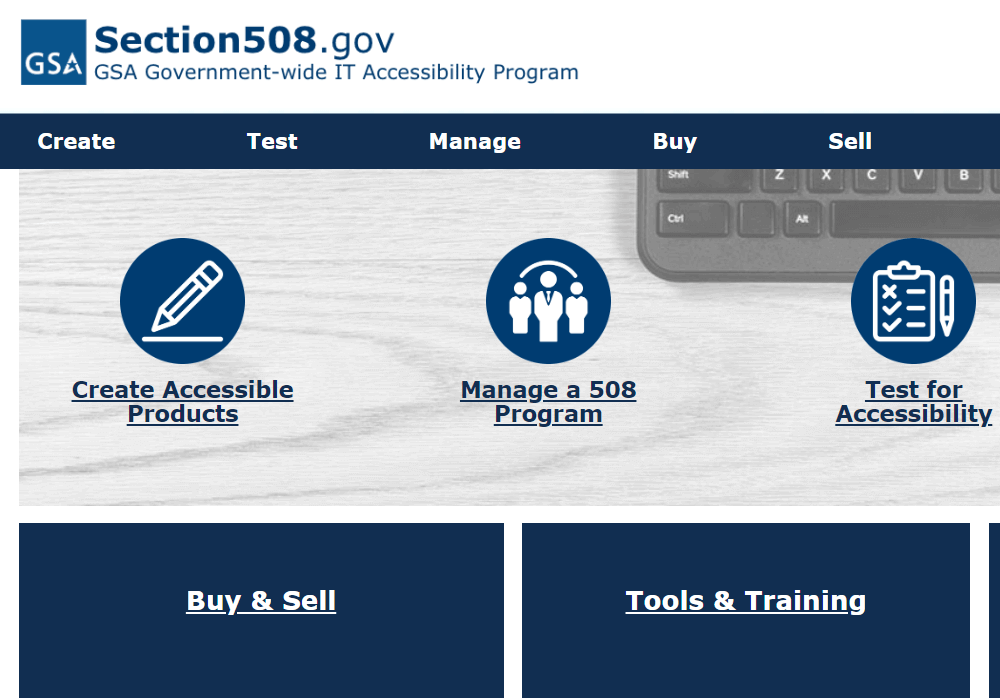 In March 2017, the U.S. Access Board published a final update for Section 508’s accessibility requirements for information and communication technology (ICT). The update was intended to provide a stricter definition of “accessibility,” and to bring the requirements in line with the radically-new technology of the 21st century.

There are 4 major changes in the 2017 revision:

What are the differences between Section 508 and ADA?

The Rehabilitation Act of 1973 is America’s oldest accessibility-related legislation. Thanks to 2 updates to Section 508, it requires all federal agencies and any bodies that accept federal funding to make their technology accessible to people with disabilities.

The Americans with Disabilities Act (ADA) is a more recent piece of legislation that encompasses many aspects of accessibility. The ADA prohibits discrimination against individuals with disabilities in private entities that are classified as “public accommodations” as well as in federal agencies and bodies.

Both acts relate to accessibility for people with disabilities, but there are important differences between them.

Strictly speaking, Section 508 is a set of rules for government entities, although it includes any organizations that receive federal funding.

That means that government-supported institutions like museums or universities, medical centers that accept Medicaid or Medicare, and programs run by organizations that are partially federally funded all have to abide by Section 508, a requirement that was put to the test by lawsuits against Harvard University and MIT in 2015.

Section 508’s accessibility rules also affect contractors or third-party workers that provide services for government bodies or organizations that receive federal funds. That means that any digital platform or website that’s in any way connected with a body that receives federal funds and is used by the public, has to comply with Section 508.

Small businesses should keep this in mind if they want to go after government grants or contract work with federal agencies.

Unlike Section 508, the ADA affects the entire private sector. Businesses and places of work such as restaurants, hotels, theaters, doctor's offices, pharmacies, retail stores, museums, libraries, parks, and daycare centers are just some of the places that have to comply with the ADA.

The ADA requires businesses to make accommodations for their employees, and their customers or users. In the words of the law itself, no person with a disability may be “excluded from participation in or be denied the benefits of the services” of a publicly accessible business. Businesses have to make "reasonable modifications" to their usual ways of doing things when serving people with disabilities.

A steady stream of lawsuits and court rulings over the last few years has confirmed that ADA applies to websites and online portals just as much as to physical stores and offices, stretching to over 2,000 ADA lawsuits filed in 2018 and tens of thousands of demand letters. Through courts of law, it’s become clear that in practice, "reasonable modifications" means that if the technology exists to make an online tool or content accessible, the business or organization has to use it.

What do businesses need to do to comply with Section 508?

Section 508 originally did not lay out specific rules for web accessibility compliance, although companies can get clearer guidance from the U.S. Access Board, the federal agency devoted to accessibility issues.

At the beginning of 2018, lawmakers added a rule to Section 508 that set the WCAG 2.0 as the accessibility standard for Section 508 compliance, so most federal organizations and other federally-funded bodies need to meet Level AA compliance.

When it comes to the ADA, the situation is less clear. The Department of Justice and several U.S. courts have frequently referenced the WCAG success criteria as benchmarks for compliance. However, the DOJ has declined to adopt the WCAG as an official legal standard for the ADA, preferring to leave flexibility for companies to decide what compliance looks like for their websites. This flexibility is more of a curse than a blessing because companies aren’t sure how to proceed to be sure that their websites won’t fall foul of the ADA. But the WCAG seems to be the best measure of web accessibility for both the ADA and Section 508.

How can you know if your website is accessibility compliant?

Free auditing tools are available online to check your website’s accessibility and compliance levels with ease. With accessScan, accessiBe’s accessibility checker, you’re presented a holistic overview of accessibility errors and what needs to be adjusted in order to comply with WCAG 2.1 Level AA guidelines. The scan operates in just a few seconds, providing you with an almost-immediate answer to whether your website is ADA Title lll compliant or not.

A range of Section 508 lawsuits has been brought against various institutions over the past decade which tests the law in the real world. These lawsuits have revealed a lot about the applicability of Section 508.

NAD vs. Harvard and MIT

In 2015, the National Association of the Deaf (NAD) filed lawsuits against Harvard University and MIT, which are both government-funded institutions. The NAD accused them of violating Section 508 of the Rehabilitation Act because they didn’t provide accurate and comprehensive captioning for online course materials.

The case is still going on, but a Massachusetts judge already rejected motions to dismiss the case. The judge declared that the NAD’s claims are both plausible, and in theory in line with the Rehabilitation Act, even though the universities receive government funding but are not government bodies, and even though adding captions to the huge amount of material on Harvard and MIT’s online education platforms would require a massive investment of time and effort.

NFB vs. Department of Education

In 2009, the National Federation of the Blind (NFB) filed an administrative complaint with the United States Department of Education. The NFB claims that one of the Department’s websites called the U.S.A. Learns violates Section 508 because it’s inaccessible to blind people who use text-to-speech technology or Braille displays to access information.

In this case, U.S.A. Learns is a free English-language learning website that happens to be operated by the Department of Education, emphasizing that any online platform that’s funded by the government is subject to Section 508.

In May of 2013, a blind attorney working for the Department of Homeland Security (DHS) sued the department for failing to equip him with accessibility tools so that he could perform his job.  The plaintiff, Michael Leiterman, said that he lost countless hours of work time because system upgrades interfered with his computer reading tools, so he couldn’t carry out his other duties and professional development, and was therefore denied promotion.

DHS was forced to reach a settlement. This was a government department that was found guilty of failing to provide the integrations that an employee with disabilities needed to make his work easier, even though he was able to do his work eventually.

Find out now if your website
is WCAG  & ADA  compliant